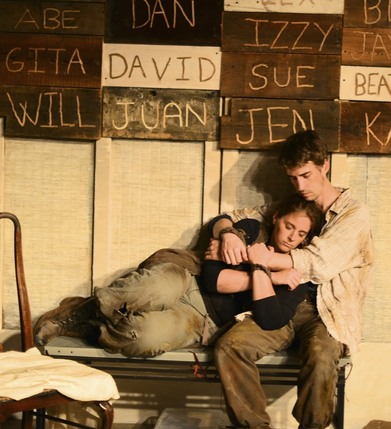 So there’s not much more to say about this but: WOW…

Mr. Rogers displays an impressive control over his sprawling material, creating a convincing postapocalyptic world inside a sturdy theatrical structure.Â He is assisted again by the director Jordana Williams, whose emphasis on clarity is exactly what this plot-driven epic demands.

A play every bit as rich and daring as the previous twoâ€¦ ably completing the long and stirring transmutation through which Rogers has taken these characters-from small domestic anxieties to far-reaching debates about mankindâ€™s survival in the face of oppression and moral decay.

Rogers skillfully builds a two-act real-time drama with surprise and shock galore. I wonâ€™t say anymore about the plot, but I was on the edge of my seat with occasional tears stinging my eyelidsâ€¦ Though it helps to have seen the trilogy in its entirety to get the full effect, this piece stands on its own. This is science fiction, but first and foremost, itâ€™s effective dramaâ€¦ I feel honored to have borne witness to this magnificent series in its entirety. Go.

The crackling alien-takeover drama can operate independently of its former installments. In fact, winding blind through the narrative mazeâ€¦ creates the sensationÂ of gradually unfolding truth, of hearing a story at the edge of great complexity.Â As for those who saw sections one and two, Iâ€™m assuming you were there at the Secret Theatre ahead of me. Who could stay away?Â â€¦In Cheekâ€™s long series of downtown triumphsâ€¦ I can not remember ever seeing her in such full, exultant stride.

An intimate, emotional work, bridging the head and the heart without ever resorting to pathos or unearned sentimentâ€¦Â The emotional material here is so deft that it pushes for real estate on a par with Shakespeare, Ibsen and Oâ€™Neillâ€¦Â So make the time to catch this show â€“ youâ€™ll regret it if you donâ€™t.

Mac Rogersâ€™ Sovereign is a gripping and satisfying ending to his epic alien invasion tale,Â The Honeycomb Trilogy, proving that the work as a whole is one of the most intelligent and complex theatrical events of the year.

This is definitely the theater of Big Ideas. The only place one can find a similar level of innovation and profundity these days is on cable dramas likeÂ The WireÂ orÂ The Sorpranos. Sci-fi in Mr. Rogersâ€™s hands invigorates the stage and elevates it to where it used to be: the place where we go to learn about ourselves and experience catharsis in the company of others.Â

Sovereign is a mixture of Greek tragedy, courtroom drama, and epic science fiction adventureâ€¦Mac Rogers does justice to both the art of science fiction, and the medium of theater throughout the series. His writing is ambitious and surprisingâ€¦Gideon Productions has certainly set high stakes for serialized theater with these three shows, and is definitely a group to keep on your radar.

Rogers succeeds in his goal: a low-tech science fiction epicâ€”a family drama all on one setâ€”and he has delivered admirably throughout. The endgame for Ronnie and Abbie, the tragic characters of the saga, is heart-wrenchingly sad, touching, and bittersweetâ€¦Â The accomplishment of the world Rogers and Gideon have built is the entirety of the world and the characters they created throughout the three plays: all of the nuance, all of the humanity.

This play is highly engaging, with a new cast of powerful actors and the same writing and directing that have made the past installments so successful. Even if you didnâ€™t catch the first two plays, this one functions well a stand-alone. Â The humor, emotional resonance, and the entire productionâ€™s remarkable ability to create a compelling sci-fi piece on a small set make Sovereign well worth checking out.

The strength ofÂ Sovereignâ€˜sÂ cast, the dedication of the crew, and proven talent of the playwright, are each reasons enough for me to highly recommend this show, even to newcomers. Throw in the fact that, buried within that harshness, there is still a great deal of genuine humor and hope, and I really mustÂ insistÂ that you check out this production. Set phasers to stunning, and get your ticket today.

WithÂ Sovereign, playwright Mac Rogers and directorÂ Jordana WilliamsÂ bring home the wonderfulÂ Honeycomb TrilogyÂ with verve, humor, and a bit of campinessâ€¦ For years, critics have debated about whether science fiction can be literature. There is among many a conviction that once you add alien invaders, human subtleties go out the window. Once again, Mac Rogers has proved them wrong.