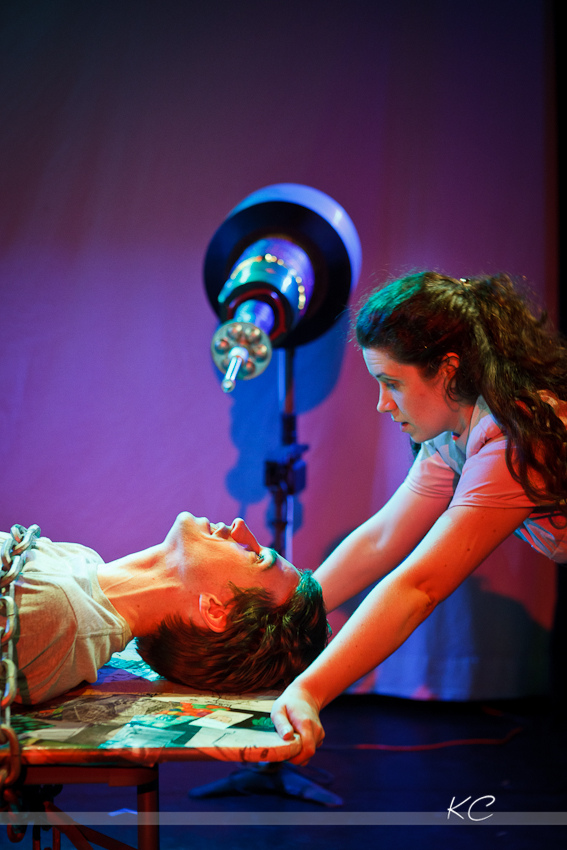 First review for BrainExplode! has come out and it’s from a video gaming website — GameSetWatch:

“Though the early running contender for best of show is easily BrainExplode!”

“…the acting is absolutely top-notch; [not] only do they process instructions in an entertaining manner, but their interactions with the audience are warm and inviting, with the end result being characters that you honestly want to help get through their crisis.”

“…those involved with BrainExplode! know the world of interactive fiction and respect it. Thus it truly is a game, and the best compliment I can offer for any kind is, upon watching it in action and others being engaged, you will be begging to be the next person to have their hands on that controller, or in this case microphone.”

“At the risk of sounding over dramatic, BrainExplode! represents a new standard from which all game influence theater must be judged upon.”

“Brain Explode is more than just a game, there’s a proper story and it’s enjoyable to watch even for audience members who aren’t one of the players. The performers stay in character, but find ways to help out if the audience appears to be stumped, and will play along if ordered to do something silly (At the performance I saw, one joker made Ray carry his mother’s purse for a section of the game, something Ray did not forget in subsequent scenes).”

“Brain Explode is a tricky project, and while it isn’t grand drama, it is a very unusual piece of theater. It might be a bit gimmicky, or too experimental for many theater-goers, but it is certainly of interest to people who enjoy seeing boundaries pushed.

Although interactive theater has been around for a while, this is the first project I’ve seen which uses the text adventure premise, and the show is a very clever blending of a game and a play. Adventure game fans should definitely catch Brain Explode, and arrive early in order to play.”

“The sheer amount of planning and work that went into preparing all the worlds and alternate endings that might arise depending on the audience’s suggestion are impressive, but more impressive are the actors’ performances through such simultaneously wide and narrow parameters. For while Heskett and Melnyk must be ready to react to whatever the audience throws their way, they must also remember the long and detailed bank of information about their lives, their parents, and their relationship. Heskett’s Ray is appropriately self-effacing, and he does a fantastic job casually guiding the players to possible solutions that might get them to the next level without making it look like work. Melnyk’s portrayals of both Ginny and Ray’s neurotic mother are a real treat to watch. Whether she is playing the supportive-yet-sly girlfriend or the wildly inappropriate MidWestern matriarch, Melnyk’s energy, earnestness, and comedic timing make us genuinely care about her fate. And that of her boyfriend, and his potentially exploding brain. Jim Hammer’s costumes transport us in the unfortunate polyester of 1987, and the rest of the production team works admirably at what must have been an memorably unpredictable job of cueing lights and sound for a half-improvised play. Delightfully tongue and cheek, BrainExplode! offers what the best games always do–a chance to play.”

“The result, then, allows six volunteers to fool around with Ray’s life as much as they’d like. For example, the evening I attended the show, the audience had spent nearly thirty minutes encouraging Ray to perform with greater than usual charisma, providing him with basic psychoanalysis, and referring to him as “Storm King,” before finally figuring out how to open the locked door. Did they then instruct him to walk through said door? No, they did not. Instead, they threw object after object through the open door, much to Ray’s increasingly snarky (and incredibly well ad-libbed) disapproval. (Most impressive is the way Heskett spent much of this scene with a blanket wrapped around his fist and a purse clutched in one arm — because the audience had never countermanded their instructions for him to do so in the first place.) Such was the genius of the show, for while it had a clear structure — and a literal countdown clock — it refused to be bound simply to the scripted scenarios: it might point, push, and eventually prod the players in the right direction, but it wouldn’t force anything to occur. Whatever happened, happened: Will Wright would be proud; there are even alternate endings (four in all) depending on the audience’s progress (and morality). ”

“…the two hours of Brain Explode! … fly by faster than a marathon session of, say, Plants vs. Zombies. The difference here, of course, is that Brain Explode! does more than distract you as it introduces new elements of “gameplay” (theaterplay?): it aims to teach us, through Ray, about ourselves…”

“I’ll be standing in a room with exits to the north, south, and southwest, waiting patiently, desperately, for this show to be remounted.”