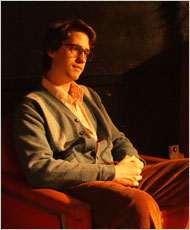 More reviews have come in for Ecstasy, which I am currently appearing in.

First off, the biggie: The New York Times had some positive things to say about my performance:

[Len] could easily come off as a buffoon, but in the delicate performance of Mr. Heskett, Len is more than a joke. It’s a scene-stealing portrayal…

Also, BackStage.com made us a “Critic’s Pick” and was positive:

EDIT: This is seriously exciting. We’ve had ELEVEN positive to very positive reviews.