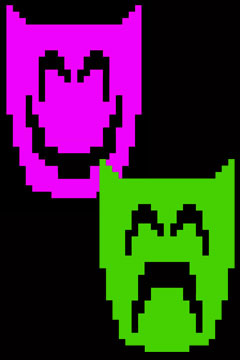 On the heels of The Little One, I’ll be performing in Theater of the Arcade as part of The Brick’s Game Play Festival. The performance is a collection of five short plays about five classic video games, written in the style of five famous playwrights. Jeff Lewonczyk‘s writing is absolutely brilliant and really nails the styles. And I’m directed by Gyda Arber, who is a real “actor’s director” and super-supportive. If that’s not enough, I’m cast along with the lovely Shelley Ray and several people whom I’ve been fans of for a while now but not had a chance to work with.

Theater of the Arcade: Five Classic Video Games Adapted for the Stage

An apelike brute holds an innocent young woman captive and hurls obstacles at anyone who dares approach. A glutton eats everything in sight while running away from the ghosts that haunt him. Are these the plots of classic video games, or are they searing narratives of modernist drama? In this collection of short plays, the creators of Brick hits Suspicious Package and Craven Monkey and the Mountain of Fury explore what happens when stories born of the arcade are given the high literary respect and dramaturgical rigor they deserve.
Written by Jeff Lewonczyk, directed by Gyda Arber.

Shows, Theater of the Arcade