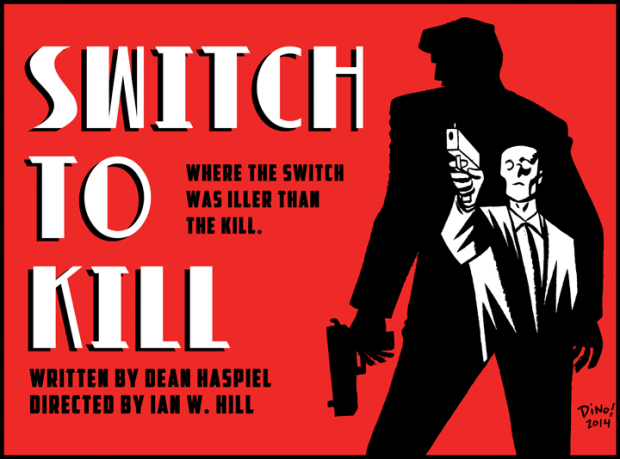 I’ll be playing “Buck Dangerzone” in “Switch to Kill” by Dean Haspiel as part of The Brick Theater’s Comic Book Festival next month, directed by Ian W. Hill. Super-cool script and an excellent team working on this. And just take a look at the blurb!

In a world where no one knows anyoneâ€™s true identity, professional hit men Dallas Twilite and Buck Dangerzone engage in a psychological duel that triggers coldâ€“blooded acts of murder. Haunted by his younger brotherâ€™s death years ago, Dallas, in a twist of events, realizes that he has never witnessed his partner, Buck, kill a man, while that partner insists that heâ€™s been responsible for every kill and won’t admit how. Their disagreement breaks a trust that has bonded them since day one.

All hell breaks loose when Frank the Shank sparks a distribution war, geriatric assassins Jimmy the Face and Massacre Mel deliver the wrong head to gang lord rival Bohannon, and gun salesman Stan the Man sells the right bullets to the wrong men. Through a series of harried gun play and emotional tests, a trust is reinstated and ghosts are lifted from the psyche of grief-stricken killers.