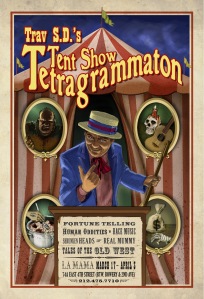 I will be appearing in one of the four pieces in Trav S.D.‘s Tent Show Tetragrammaton. I was in Spacemen From Space with Trav, and I’m thrilled and honored to be acting in this show he’s written.

You’re invited to an evening of four original one acts, written and directed by Trav S.D., exploring themes of identity and transformation as expressed through American folk culture-tall tales, superstition, theatrical stereotype, popular theatre forms (like the traveling tent show and freak show) and various form of American folk music. The plays include:

THE STRANGE CASE OF GRIPPO THE APE MAN. This play premiered in La MaMa’s Experimental Play reading series under George Ferencz’s direction in 2007, and was first runner up in the Bob Dylan Days Creative Writing Contest (Hibbing, Minnesota) in 2008. It concerns two fly-by-night hoodlums who exhibit a monstrous idiot-savant who possesses a genius for music and impersonation. But the tables are hideously turned with a twist out of O. Henry and E.C. Comics. The cast includes: JAMES HABACKER (proprietor and host of THE SLIPPER ROOM), CATHERINE MICHELE PORTER* (of Peculiar Works Project and Dixon Place) BOB LAINE, STEPHEN HESKETT, and introducing TOM BIBLA as the APE MAN.

THE BALLAD OF JASPER JAXON. A folk mini-operetta in the style of Woody Guthrie’s Dust Bowl Ballads, and performed by Trav S.D., Josh Hartung, et al, this play was given its first reading in earlier form by the And How! Theater Company in 2007, directed by Arthur Aulisi. Based on a true story, it treats of the world’s worst bank robber, who winds up being exhibited as a mummy in carnivals posthumously.

UNIVERSAL RUNDLE. This play was given its first reading at Soho Think Tank’s Sixth Floor Series in 2006. Based on a section of Sir James Frazer’s The Golden Bough, it tells the story of a voodoo priest and bluesman who lives deep in the Louisiana bayou, anxiously awaiting the usurper who will overthrow him. When the devil arrives, he comes in a surprising disguise. The play stars TIMOTHY MCCOWN REYNOLDS*, JEFF LEWONCZYK and HOPE CARTELLI (Piper McKenzie Productions and the Brick Theatre).Featuring the talents of ART WALLACE as “The Old Cracker in the Chair” and songs by Trav S.D.

STREGA NONA stars SARAH MALINDA ENGELKE* (of Supermajor and Dye Violets) as the “Little Baby Grandma Witch” who reads your fortune in her magical pot of spaghetti and serenades you out with her accordion. The evening’s digestif. CAROLYN RASHIP directs