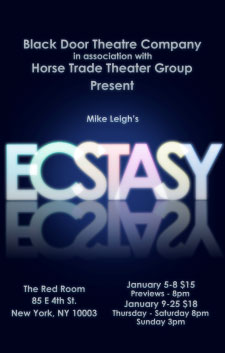 I have a great role in Black Door Theatre Company’s production of Ecstasy that’s opening this week with previews.

“Ecstasy covers the lives of four blue-collar friends living in 1979 London and the drunken frustration in their lives, namely that of Jean, who struggles to escape the confines of her life and the people in it. While Ecstasy speaks to a very specific time and place, the socio-economic despairs and frustrations facing each character make the story universal and timeless; especially on the eve of our own financial crisis.”